Just added to your cart

What does mate mean to people? As you might already know, mate is a drink prepared by adding hoy water into laves of yerba mate, which is a plant that grows originally in Paraguay, Argentina and Brazil. That goes into a cup made of pumpkin, wood, metal or glass and then it's sucked throw a metal straw.

The most distinctive thing about mate is its social aspect. Because if you're drinking mate with others, you share the same mate. And the same straw.

And what does that mean?

Mate: more than a drink

Although mate does have really good health benefits, such as antioxidants and nutrients, it must be said that most people drink it because of what it means to the society.

When you go to, let's say Argentina, and someone wants to meet up somewhere for a chat, they might not say "Shall we meet for a chat?", they might say "Let's go have some mates". And it is understood that you'll go for a chat.

It's also quite common that when you go to someone's house they receive you with some mates. Maybe they're already drinking some and they offer you, or they'll make specially for you, as you're their guest and they want to treat you well: and mate's perfect for that.

If there's a friends or family meeting being organised, it's really common to choose someone who's going to be the "mate person". That person needs to make sure that they've got enough yerba mate, that they've got both the mate cup and the straw and that there's hot water in the thermos flask. That persons is as important as that one bringing the food, or as the driver. If someone forgot the mate, it's almost a sin.

Most of the best conversions I've had with friends had a mate in between. It's a symbol of camaraderie, of friendship. It means that you want to get close to the person you're talking to, that by sharing something as well-known as a mate, they do mean something to you.

One of the most popular souvenirs in Argentina are mate. If you visit another town or another province, you might bring a special mate with some characteristic shape, colour or inscription on it. Some people have collections of mate gourds! They've got shelves full of mates from different places or from different stages of their lives.

A lot of famous people carry their mates around with pride. Lionel Messi and Luis Suarez at Barcelona, and even Pope Francisco was one seen drinking a mate someone from the public gave him! 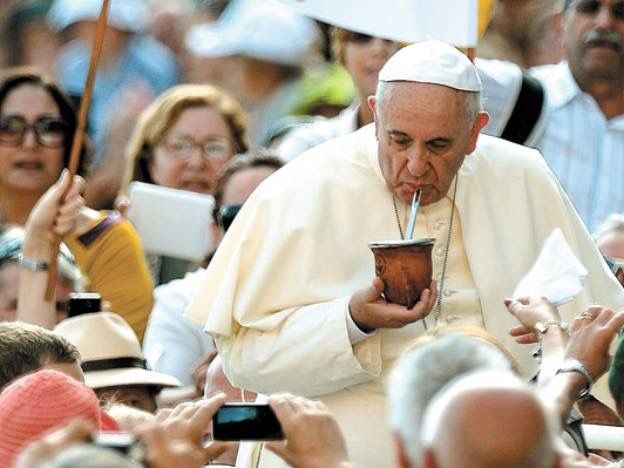 We now agree that mate is definitely a social icon in the countries we've mentioned, but we must also say that mate can definitely be enjoy alone.

Some people have mate for breakfast for example. It's perfect for when you're studying or working, not only because it contains a little bit of caffeine that keeps you awake and concentrated, but also because it stops you from having unhealthy things like sodas or snacks!

What about reading a book with some mates next to you when it's cold at night, or enjoying your football game on a Sunday afternoon drinking some nice "green ones"?

You can definitely enjoy mate on your own.